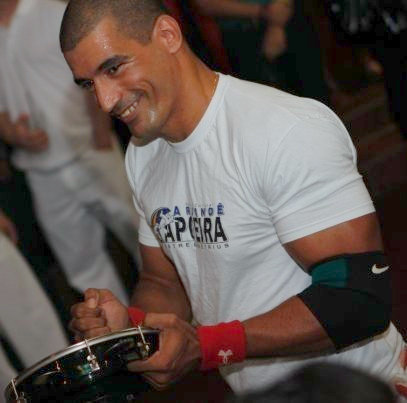 After joining the army (servico militar) in Cuiabá, MT, Mestre Demétrius graduated to the rank of Monitor and started to work at a community center, Capoeira Nova Geracão (New Generation Capoeira). The people there, as well as his own Mestre, soon began to see that he had a gift for teaching the art of Capoeira.

Mestre Demétrius continued to travel through states of Brasil and started to gain recognition for his work in helping poor children and for his participation in national Capoeira events. He was the 2 time champion for the Brazilian Confideration of Capoeira (Confederacao Brasileira de Capoeira).

In 1994, Mestre Demétrius participated in an event in Minas Gerais where he had the opportunity to meet Mestre Loka, the president of CapuraGinga and it was there that Mestre Loka invited him to join CapuraGinga. From Mestre Loka, Mestre Demétrius learned to enrich his professionlism in what he likes doing most, teaching capoeira. While in CapuraGinga, Mestre Demétrius helped to create the guidelines that the group follows when assessing a student's graduation. All this and more was was very new to him. Not long after, he received an invitation to do workshops in Israel, Amsterdam, Holland; Frankford, Germany and Zurich, Switzerland, and then the United States.

On February 25th, 2007, Mestre Demétrius created his own group, Centro Cultural Aruandê Capoeira. With students in six different countries, his teachings continue to be passed on to new students everyday. Today, he lives in Houston, Texas where he continues working with Capoeira, passing on discipline, culture, bodily expression, poetry, music and a philosophy of life.

Mestre Demétrius thanks all the various cities, in the USA, Brazil and across the world that asked to have a workshop with him.